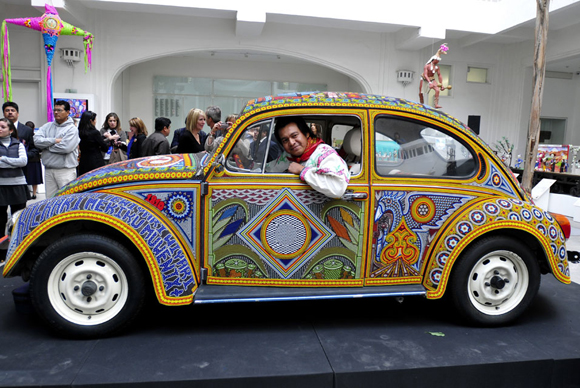 The Volkswagen Beetle with its long association with Mexico, has been used in a unique project initiated by the Museo de Arte Popular (MAP), and turned into a colorful art car represented with the art of the indigenous Huichol. “Vochol” (from the slang word for the car – Vocho – and the word “Huichol”) was created by two indigenous families over a period of seven months.

This VW art car is covered with over 2 million beads on the body, dashboard, and steering wheel and is intended to highlight the art of the region. The designs on the vw art car were created by master craftsman Francisco Bautista, that depict traditional imagery. Serpents resting on clouds on the front of the art car, sun and four eagles on the roof, and a shaman in a boat on the trunk.

The Vochol will be on display at the MAP in Mexico City and will go on tour in Europe and America, and finally, it will be put up for auction that will hopefully go for about half a million pesos. The proceeds will go to the Association of Friends of the Museo de Arte Popular (AAMAP). 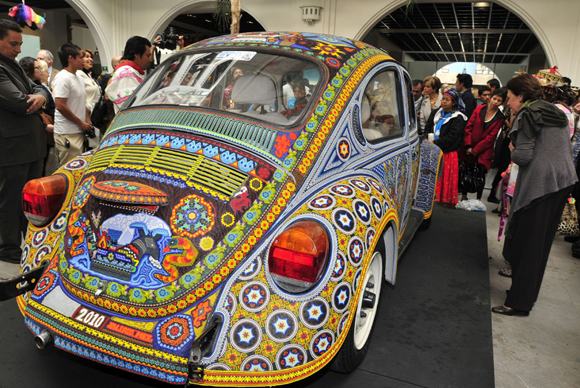 Costas Schuler aka "The Pen Guy" who entered the world of art cars by creating the world famous Mercedes Pens Art Car covered in over 10,000 pens. From then he went on to create Art Car Central, home of the world's largest collection of art cars, art bikes, mutant vehicles and every other decorated vehicle known to man. Enjoy and if you see and art car please submit your today:)
Previous: How to sell an Art Car by Bizarro
Next: Dickens 44 Bascom Art Car Mystery