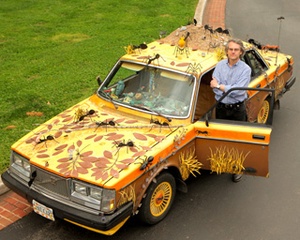 David Schwartz is a philosophy professor at Randolph who completed his ants art car masterpiece in 2005 and has driven it to work ever since. Schwartz took about a year to transform his 1984 graphite gray Volvo into the ant-mobile.

The and car is covered in vines, leaves that creep up on all sides and an anthill towers on the roof. But the main attraction is dozens of ants crawling all over the car. A dedicated art car artist drove his car all the way to the Houston Art Car Parade in Texas, a whopping 1,300 mile trek that resulted pushing his odometer over 300,000 miles on his second trip.

The Houston Art Car Parade, founded in 1988, bills itself as the largest gathering of “art cars” in the world. (This year’s parade will be on May 22.) Schwartz first discovered the subculture in the early 1990s, when he stumbled upon the parade while living in the Houston area. Within a decade of that first exposure, Schwartz decided to make his own art car. It took several years of brainstorming, however, before Schwartz settled on a concept. “I was fascinated by abandoned vehicles being taken over by nature,” Schwartz said of his early inspiration. That idea, plus the serendipity of finding giant metal ants at the hardware store, laid the foundation for his ant-mobile. Over the past six years, Schwartz has allowed the car to evolve with the addition of birds’ nests and other small objects. Nature, too, has done a number on the vehicle. “This stick fell out of a tree and landed almost exactly in that spot,” Schwartz said, pointing to a stick mingled between a pair of ants marching up the hood. “It’s been there almost two years now.” Schwartz says his car explores the relationship between man-made objects and the forces of nature. It also challenges the idea of the car as a status symbol, or a shiny object that must stay pristine. “I tell people, it’s very liberating the first time you drill a hole in a car,” he said. Schwartz’s number one priority is to keep the car drivable and legal. Each year, his ant car passes the state-mandated safety inspection. Washing the outside of the ant-mobile is one of Schwartz’s biggest challenges. With hundreds of objects decorating the exterior, Schwartz’s car is too delicate for the drive-through car wash. For the Houston parade, Schwartz plans on covering the dirt with a new coat of paint. Meanwhile, the ant car remains a conversation piece just about anywhere Schwartz goes. “It makes people smile,” Schwartz said. “The fact that it gives people a smile makes me happy.” On one level, The Ant Car is a tribute to that lowly but fabulous creature, the ant.

Ants are nature’s original recyclers, and our world quite literally couldn’t live without them.

Ants lead sophisticated and industrious lives, building complex colonies ruled by clear social hierarchies, burying their dead, practicing agriculture, and even sacrificing their lives for the good of the colony.

How can such a ‘simple’ creature do so many ‘human-like’ things?  In reality, ants show us that humans are much more like other animals than we may want to believe.

On a conceptual level, The Ant Car dances around that fine line between the natural and the artificial.

Like an old car abandoned in the woods, The Ant Car is an artifact being consumed by nature, slowly succumbing to the irresistible forces of the natural world.  The car’s original pristine form has given way to scavenging insects, sprouting grasses, falling leaves, and creeping vines. Yet, a closer look reveals that all these natural organisms and objects are at the same time thoroughly artificial — the ants are made of steel, the leaves and grass made of tin, and the vines made of copper roofing and copper tubing. At the same time, however, these artificial leaves and vines were made from direct tracings of actual leaves, vines, and grasses found in the woods near my home.  In addition, some of the ants are carting off iconic symbols of human artifice, such as the Statue of Liberty and the Eiffel Tower.  Topping the whole thing off is the ants’ natural home, the ant mound, which is made from that most unnatural of substances, Bondo.  Since its creation in 2004-5, The Ant Car has evolved, incorporating works of artifice made from non human animals, most notably bird nests I have found on walks near the Blue Ridge Mountains.  In a tribute to the birds’ impressive handiwork, these nests have survived intact on the car for over a year through rain, snow, and 60 mph highway speeds!

Costas Schuler aka "The Pen Guy" who entered the world of art cars by creating the world famous Mercedes Pens Art Car covered in over 10,000 pens. From then he went on to create Art Car Central, home of the world's largest collection of art cars, art bikes, mutant vehicles and every other decorated vehicle known to man. Enjoy and if you see and art car please submit your today:)
Previous: Knitted Norwegian Art Car Beauty
Next: Ice Cream Truck Halloween Art Car Wheelchair Costume and Much Much More