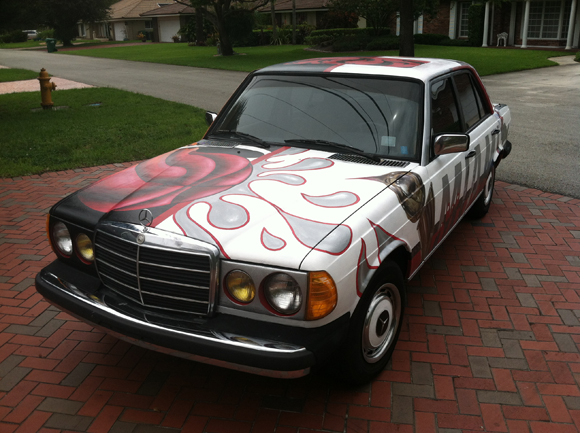 Martin Reese is a 28-year-old artist based in Daytona Beach Miami and heavy duty sports fans who turned this 1983 Mercedes-Benz into a mobile mural for the Miami Heat in just a few days. He is also the artist who painted the same car for Steelers fans in time for the super bowl last year.

Despite the fact that he did not have tickets to the game it did not stop Martin from driving his Immaculate Mercedes art car 300 miles down to Miami to be with fans in time for the big game.

He wanted to show off his favorite player LeBron [James] and create a work of art that really expressed the passion for the game that he, [Dwyane] Wade, and [Chris] Bosh show while also representing the city’s atmosphere.

The whole process took  about 100 hours, began Wednesday [June 13] and finished the following Monday. He really wanted to have the car done by Game 3 so some of the painting session took as long as 24 hours. There is nothing like a little “heat” to get the job done in time.

Reese has many works of art displayed on his web site, including many tributes to famous artist and athletes. He also has a large collection of painted paddles in case you have aesthetic or disciplinary needs in the near future.

Costas Schuler aka "The Pen Guy" who entered the world of art cars by creating the world famous Mercedes Pens Art Car covered in over 10,000 pens. From then he went on to create Art Car Central, home of the world's largest collection of art cars, art bikes, mutant vehicles and every other decorated vehicle known to man. Enjoy and if you see and art car please submit your today:)
Previous: Puppet Art Car Going Mobile by Patryk Chwastek
Next: Knitted Norwegian Art Car Beauty