Steelers Fan Paints his Mercedes in time for Super Bowl

Martin Reese’s 1983 Mercedes-Benz is decorated with a Pittsburgh Steelers logo and portraits of several players. Reese, of Daytona Beach, transformed his car into a Steelers memorial for the upcoming Super Bowl. 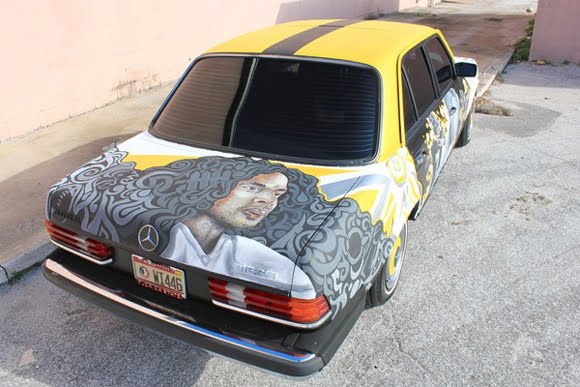 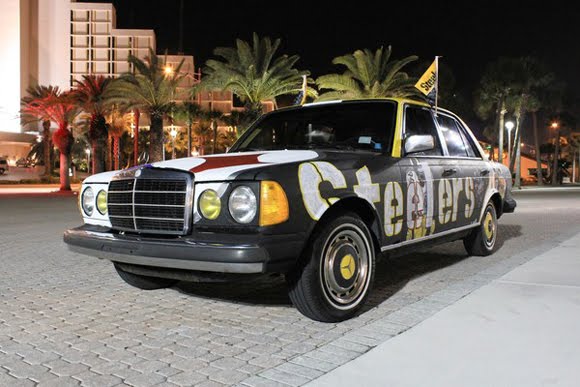 Martin Reese wanted to show his love for the Pittsburgh Steelers.

But instead of buying a T-shirt, Reese, 27, of Daytona Beach spent 90 hours transforming his 1983 Mercedes-Benz into a Steelers memorial. He hand-painted it black and gold, splashed the Steelers logo across the hood and added safety Troy Polamalu’s long, flowing hair on the trunk.

“I’ve been a die-hard Steelers fan since I was in elementary school,” Reese said.

And now, as the team prepares for Sunday’s Super Bowl against the Green Bay Packers, Reese is on the road, headed to the game and spreading Steelers spirit along the way.

Wednesday afternoon, Reese took off for Dallas Cowboy Stadium in Arlington, Texas, the site of the game, in the car he dubbed, “The Immaculate Mercedes,” a reference to the Steelers’ 1972 Immaculate Reception, one of the most famous plays in football history.
Get the day’s top stories in your inbox. Click here to sign up for the Midday Update newsletter

Reese doesn’t have a ticket to the Super Bowl, but he expects “Steeler nation to accept me with open arms.”

An art teacher at Pine Ridge High School in Deltona, Reese began transforming his car into a moving piece of art three weeks ago. At that point, the Steelers were still in the playoffs.

“I had faith they would beat the Jets and go on to the Super Bowl,” Reese said. He finished earlier this week.

Since then, he has been driving the car to work, much to the enjoyment of his fellow Steelers fans.

He also got some grief from Packers fans, who reminded him that their team is favored to win.

“They appreciated the artwork,” Reese said.

Costas Schuler aka "The Pen Guy" who entered the world of art cars by creating the world famous Mercedes Pens Art Car covered in over 10,000 pens. From then he went on to create Art Car Central, home of the world's largest collection of art cars, art bikes, mutant vehicles and every other decorated vehicle known to man. Enjoy and if you see and art car please submit your today:)
Previous: The Evolution of Classic Art Cars by d’Assis Cordeiro
Next: Egyptian Rustic Art Cars