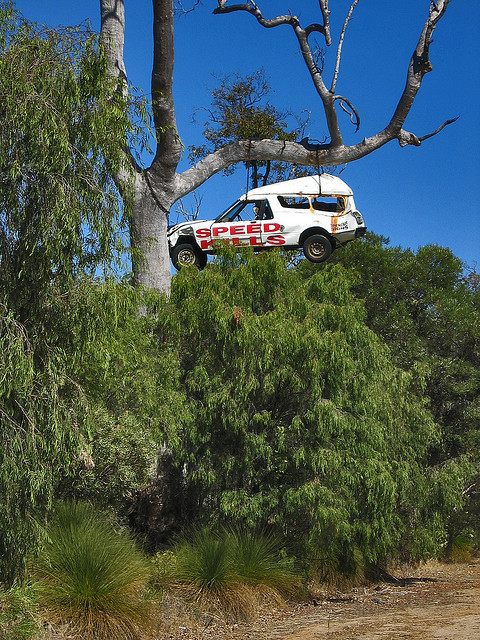 Again with the hanging car, but this time its a warning to other drivers in West Australia that “Speed Kills”. But did did it ever occur to the marketing genius that distraction also kills. What is the point of slowing down only to run into another tree while trying to read the sign. Two weeks later your car is up on a tree down the street saying “Billboards Kill”. Speed doesn’t kill people, cars hanging from trees in Australia telling people that “speed kills”, kills people. Photo by Owen

Costas Schuler aka "The Pen Guy" who entered the world of art cars by creating the world famous Mercedes Pens Art Car covered in over 10,000 pens. From then he went on to create Art Car Central, home of the world's largest collection of art cars, art bikes, mutant vehicles and every other decorated vehicle known to man. Enjoy and if you see and art car please submit your today:)
Previous: Art Cars Hanging Out To Dry in Chile
Next: Lightning McQueen Volvo Rally Art Car