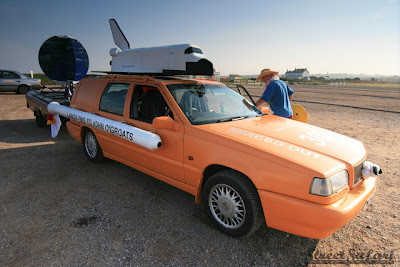 From the deranged minds that brought you the Tank Volvo and Helicopter, we have a space shuttle theme.

Not sure what the background to the idea from these particular overachievers is, maybe Moonraker, but they decided to do a space shuttle theme, with a trailer tent (its like a tent, but on a trailer) with a world on it.

Obviously, making a space shuttle out of a Volvo just doesn’t work (you need a BMW 1600 for that, which we shall show you in future weeks), so they made their own space shuttle, mounted two side boosters (SRBs) to the Volvo, and effectively made the Volvo into the external fuel tank.

Then, bolt a great big round piece of metal onto the trailer, paint the Earth on it, and hey presto, you have your very own horizontal Space Shuttle Program, with a diagram of the Earth on the trailer behind incase you forget what your home planet looks like.

The team (the overachievers) even put in some pyrotechnics so that the shuttle actually looks like it has an exhaust trail! We like. Partly because it’s always fun to see a bit of thought behind these things, and partly because the chance of the whole thing catching fire is greatly increased.

The trailer tent deserves it’s own 15 seconds of fame. It was possibly the mankiest tent you have ever seen in your life. They think the previous owners bought all the camping gear, went camping once, didn’t like it, packed the tent wet (remember it’s canvas), and let the whole thing fester and rot for several years.

When the team opened the tent for the first time in many years, there were literally bits missing from the canvas, large sections in fact.

But quick to their aid came some drinking aids. They installed a set of optics in the trailer for each evening, and as long as you got far too drunk, you didn’t notice the howling gail in the car each night. Or at least, I think that’s how that was meant to work. 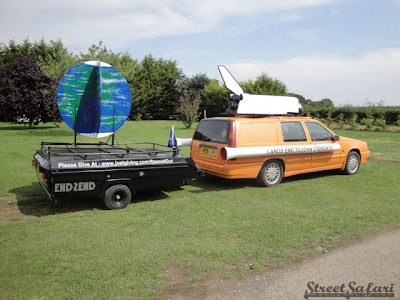 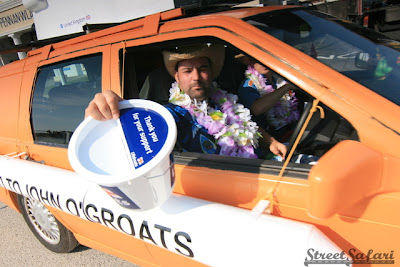 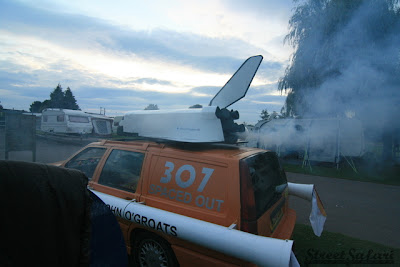 Costas Schuler aka "The Pen Guy" who entered the world of art cars by creating the world famous Mercedes Pens Art Car covered in over 10,000 pens. From then he went on to create Art Car Central, home of the world's largest collection of art cars, art bikes, mutant vehicles and every other decorated vehicle known to man. Enjoy and if you see and art car please submit your today:)
Previous: Call of the Syren – Goth 72 Cadilac by Christa Ansbergs
Next: The Road Car