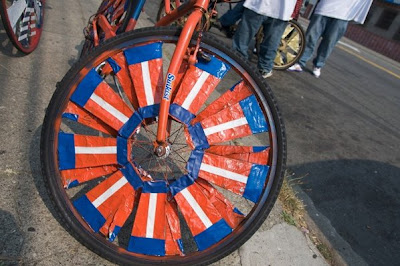 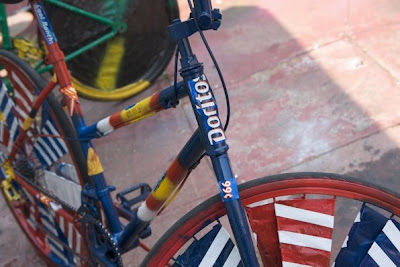 The scraper bike was birthed in Oakland by Tyrone Stevenson Jr., a 20 year old. AKA Baybe-Champ Da Scraper Bike King/Creator/Inventor. The idea came from cars that ride in Oakland called scrapers — basically an old model car, such as a Buick, that’s painted a custom color to match the bright rims that are so big that they scrape the inside of the wheel well. Stevenson and his friends took those aesthetics and applied them to bicycles, fitting large wheels on small frames.The movement went viral when a video about scraper bikes when up and went global with 3 million views. Tyrone is right now working on getting his own store front and working in is his community to help keep the youth out of trouble and in a positive frame of mind.

“The Scraper Bike Movement seeks to capture the creativity of youth living within dangerous communities. It gives them a positive outlet that is fun, educational, and promotes healthy lifestyles. The Scraper Bike Movement offers youth a sustainable group of peers that is positive and motivating. They want to expand and enlighten young people’s perspective on life through fixing and painting bicycles. Our goal is to support youth entrepreneurship and cultural innovation. The Scraper Bike Movement has been around for about 5-6 years and is now starting to get exposure worldwide.”

The Scraper Bikes will also be at this years Maker Faire

Costas Schuler aka "The Pen Guy" who entered the world of art cars by creating the world famous Mercedes Pens Art Car covered in over 10,000 pens. From then he went on to create Art Car Central, home of the world's largest collection of art cars, art bikes, mutant vehicles and every other decorated vehicle known to man. Enjoy and if you see and art car please submit your today:)
Previous: Mercedes Pens Art Car at Maker Faire 2009
Next: Rock the Bike a Pedal Powered Music Stage by Fossil Fool

How to deal with Crazy Mondays – 9 Wheeled Crazy bike