I was just go another remarkable “Finnjet” art car video that really gives you a much better idea of the magnitide of this car. The Finn Jet, created by Antti Rahko, is a 22-foot-long, 7,500-pound compilation of chrome made from 40 different cars, based on two Mercedes-Benz station wagons welded together. There are also parts from a 1962 Chrysler Imperial thrown in the mix, plus 86 lights and 36 mirrors added over six years. It also has three axles, two of which are steerable, a stove, microwave, freezer, TV, two air conditioning and even a sauna (Finns are very serious about their saunas).

Finnish-born Rahko, who is from Kurikka, a town of about 10,000 in western Finland, emigrated to the United States in 1984. He left his son in charge of the furniture business he’d built in Europe. He retired from the business and with lots of free time and his interest in old cars he bought and scoured from junkyards. He mainly built this car to amuse him self but due to health issues the Finnjet is now available for sale for only $950,000. He was discovered at a Florida art car parade and since then has been a giant hit and was even featured on the Discover Channel.

The name “Finn Jet” traces back to 1976, when the Finns launched the longest and largest car ferry in the world, and the only one powered by gas turbines. The original Finnjet is said to still be the fastest conventional ferry in service, with a recorded top speed of 33.5 knots. 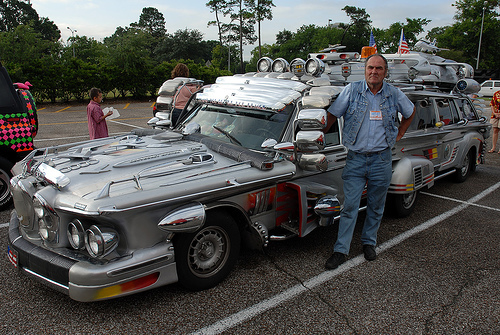 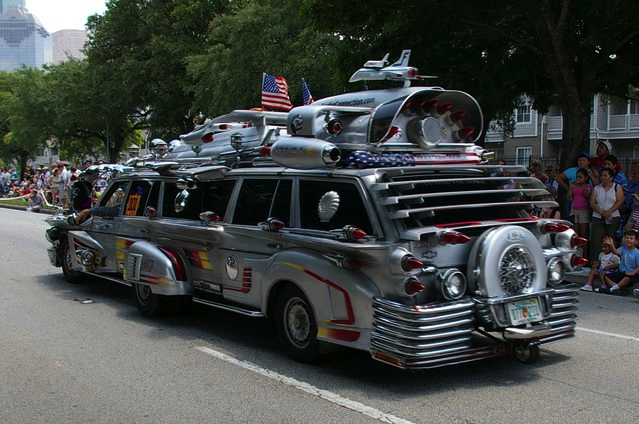 Photo by Kay and Kevin Rolfes

Costas Schuler aka "The Pen Guy" who entered the world of art cars by creating the world famous Mercedes Pens Art Car covered in over 10,000 pens. From then he went on to create Art Car Central, home of the world's largest collection of art cars, art bikes, mutant vehicles and every other decorated vehicle known to man. Enjoy and if you see and art car please submit your today:)
Previous: Hot Westcoaster Mailster Art Car For Sale
Next: 4 Startfish + 4 Barbies = TWCRV aka The Worlds Cutest RV