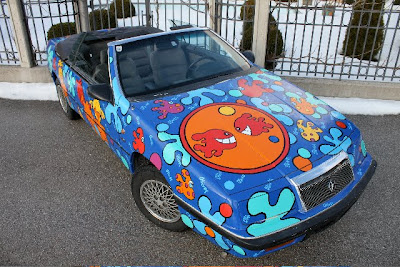 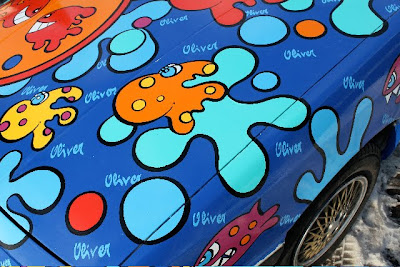 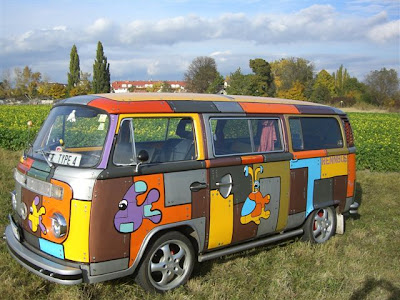 Oliver von Feistmantl is a comic PoP artist from Vienna Austria that paints on pretty much everything, like houses, ships, snowboards, skateboards and even cars.
He started out as a graffiti artist in the 90´s but got arrested, so he decided to concentrate on legal ways to exhibit throughout Europe, Asia, the Caribbeans and NYC.

The 1974 VW-Bus is called the racebus, because he got an engine from a Porsche 911 and was finished in October 2009. The 93 Chrysler Le Baron convertible was finished in 2010 and is the one he currently drives.

He hopes one day to come across a Rolls Royce Silver Shadow because its his personal dream to one day paint that car as well.

Costas Schuler aka "The Pen Guy" who entered the world of art cars by creating the world famous Mercedes Pens Art Car covered in over 10,000 pens. From then he went on to create Art Car Central, home of the world's largest collection of art cars, art bikes, mutant vehicles and every other decorated vehicle known to man. Enjoy and if you see and art car please submit your today:)
Previous: New Car + Vintage Parts + Genius + Steve Heller = Heller on Wheels
Next: Hand-carved skateboards by Doug McKee