I wrote about Steven Heller some time ago when I featured his 1960 Cadillac Fin Attaché Case. He has spent many years building furniture out of vintage cars parts and now his journey heads off in a new direction. Most people who restore old cars stick with old cars, but Steve modifies new cars and adds vintage car parts like fins, grills and other accessories from cars made in the 50’s and 60’s. Steven has been busy building and receiving awards for his work and is working towards his TV show, Heller on Wheels. His has an amazing passion for what he does and says in his video that he was put on earth to build custom cars and rocket ships. I am looking forward to seing his new creation the Cro-Magnum. 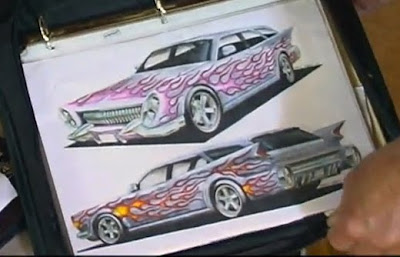 via
Take a 2006 Dodge Magnum and add 25 1950’s car parts to it and what do you get? The “Cro-Magnum!” It was started in March of 2009 and will be finished in the spring of 2010. It is really cool and will be entered into several of the most important auto shows. This car is featured in the promo and the build will be featured in the season 1 series.
The Marquis Desoto by Steve Heller 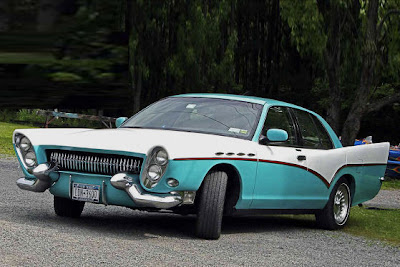 via
Winner of the 2009 New York Times Award for Collectible Car of the Year. This started out as a 2004 Mercury Marquis. Steve customized it using 22 1950’s car parts and it was later purchased by a collector who lives in California. The car will be in the Grand National Roadster Show this January, 2010 in Pomona, California and will also be at the Sacramento Auto-Rama in February, 2010. It will be featured in season 1 of the show.

Costas Schuler aka "The Pen Guy" who entered the world of art cars by creating the world famous Mercedes Pens Art Car covered in over 10,000 pens. From then he went on to create Art Car Central, home of the world's largest collection of art cars, art bikes, mutant vehicles and every other decorated vehicle known to man. Enjoy and if you see and art car please submit your today:)
Previous: Easy A Team Art Car Project
Next: Oliver von Feistmantl on Art Cars