Mammoth Speakers on Bikes – Made in Queens 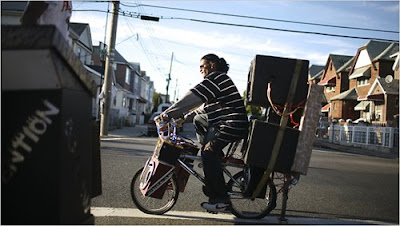 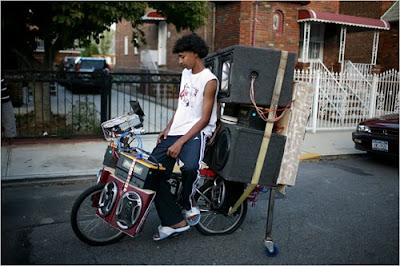 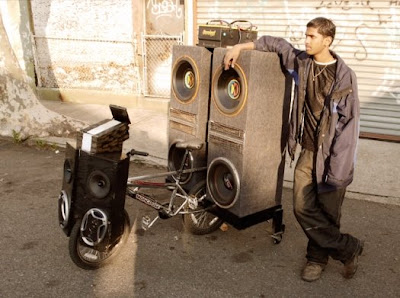 A new biker gang is roaming the streets of Richmond Hill, Queens. This crew of mostly teenagers can be seen riding along 103rd Avenue just west of the Van Wyck Expressway. The bikes roar, but the booming sound has nothing to do with engines — because there are no engines. They are ordinary bicycles, not motorcycles, although these contraptions look and sound more like rolling D.J. booths. They are outfitted with elaborate stereo systems installed by the youths.

“This one puts out 5,000 watts and cost about $4,000,” said Nick Ragbir, 18, tinkering with his two-wheeled sound system, with its powerful amplifier, two 15-inch bass woofers and four midrange speakers. It plays music from his iPod and is powered by car batteries mounted on a sturdy motocross bike.

The riders are of Guyanese and Trinidadian background. In those countries, turning bicycles into rolling outdoor sound systems is a popular hobby.

“It’s really big where I come from in Trinidad,” Mr. Ragbir said. “When I first came to New York, I started with two little speakers. People here thought I was crazy because no one here has really ever seen it, except maybe for some Spanish dudes with a radio strapped to their handlebars.”

He added: “People say, ‘It’s the next best thing to having a system in a car.’ But it’s better because you don’t even have to roll down the windows.”

Mr. Ragbir and his brother, Elvis Ragbir, 22, and their friends build and maintain their combination bike-stereos in a garage on 103rd Avenue near 130th Street. Many say they finance their hobby by installing car stereos and doing other such handiwork.

They hit the streets on warmer days and spend other days in the garage tinkering with their bikes.

Inside, one can hear the whirring of power tools, conversation in heavy Caribbean accents and the occasional testing of a sound system. They make custom cabinets of wood or plastic to house the systems. Most of the bikes have decorative lighting and some have DVD screens for viewing while riding.

Stephan Sonnylal, 17, worked on his yellow Mongoose motocross bicycle, bearing a 200-pound system, which features a 50-CD changer bearing a map of Trinidad. It puts out 3,000 watts of power and has three 10-inch speakers, a bank of midrange speakers and two tweeters. It cost $800, he said.

Clint Hasnoo, 17, has a 1,600-watt system with four midrange speakers.

Nick Ragbir showed off his new bike, equipped with a sleek 1,500-watt system with the stereo and speakers encased in clear plastic custom boxes. The car battery and the console are mounted on the handlebars, and the four midrange speakers are mounted in the center of the bike frame.

“It’s not as powerful but it’s easier to ride around,” Mr. Ragbir said.

Usually, the stereos crank out heavy Caribbean beats, but Mr. Ragbir cranked up the new system, which was playing a 1980s hit by the Outfield — “I Don’t Want to Lose Your Love Tonight” — and the near-deafening music had his friends bobbing their heads as they worked on their bikes.

The bikers said they have heard no complaints about the noise they make from residents or people they pass. And although there is a city law which says a summons may be issued if a person operates a personal audio device, like a radio, heard from up to 25 feet away, the bikers’ mobile stereos are less likely to attract attention because the noise does not persist in one place very long.

Mohan Samaroo, 19, has a system mounted on his sturdy Mongoose, with four 12-inch speakers that can handle the 5,000 watts. There are extra braces resting on training wheels, which can support the heavy system and also an extra rider standing on the back. When the bike cruises down the street with Mr. Samaroo standing, he said, he looks like a D.J. behind a sound system at a nightclub.

The group rides in packs, each taking turns playing his sound system. Sometimes, the riders cruise down Atlantic Avenue to a McDonald’s, where car aficionados gather.

“People look at us like we’re crazy because no one’s really seen it here,” said Nick Ragbir, who with Mr. Samaroo formed a business called Legal Intentionz to install stereos on bikes.

“Some guy hired me to build them for his kids,” he said. “Now a lot of people want them.”

Costas Schuler aka "The Pen Guy" who entered the world of art cars by creating the world famous Mercedes Pens Art Car covered in over 10,000 pens. From then he went on to create Art Car Central, home of the world's largest collection of art cars, art bikes, mutant vehicles and every other decorated vehicle known to man. Enjoy and if you see and art car please submit your today:)
Previous: Pimp my Japanese Bike Ride – Robotech Lo-Rider
Next: Art Car Calendar – Now Available for 2009

Candy Cane Car Not For Sale – By Pogo Dave