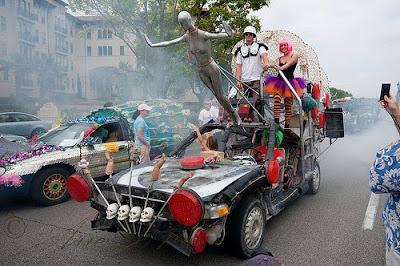 inCARnation, the Apocalypse Mobile/Time Machine was sent in by Meg (Hint, the one with the pink hair). It was built over the course of a few years at her apartment in Minneapolis and is under constant construction. The frame is an early 1990s Honda Accord that belonged to Adam. Adam Lutterman (Atom), Andy Rennert (MN Phatts) and Meg (Dee Zaster) all contributed to its creation. They take it to Burning Man every year and it made its debut this year at the Houston Art Car Parade and promise to be back, I guess that’s the time machine aspect of the inCARnation. They also participate in Art Car events in the Twin Cities on a regular basis. They are beginning work on radically altering the appearance, but the plans are under wraps. It will be bigger and badder the next time around, so keep a look out!

Costas Schuler aka "The Pen Guy" who entered the world of art cars by creating the world famous Mercedes Pens Art Car covered in over 10,000 pens. From then he went on to create Art Car Central, home of the world's largest collection of art cars, art bikes, mutant vehicles and every other decorated vehicle known to man. Enjoy and if you see and art car please submit your today:)
Previous: Previous Post
Next: The Art of Car Sounds