Philo Northrup is responsible for giving his Honda Element named Daisy Singer an extreme makeover and in his own words this is what he had to say:
“Daisy Singer is so named because of two objects attached to it. I started to artify this brand new 2004 Honda Element in Marcola, Oregon, with my mentor, Jack DeVore. He had an old SINGER sewing machine treadle and an old DAISY stove door. The names on these iron relics just seemed to fit for some strange reason. Later I found out that Daisy Singer, sewing machine heiress, left her fortune to whoever found her will in a bottle. She tossed this bottle into London’s Thames River in 1937, and it washed ashore in San Francisco in 1949 to be found by a very lucky beachcomber named, of course, Jack.
So Daisy Singer it is!
My ambitions with this ArtCar are formal, not thematic, focusing on design & texture. I am creating something antique and curvilinear out of a new shoebox. I am indulging my love of oxidation – the patina of decay. Daisy is an earthy ArtCar, which fits in nicely with the fiery Truck in Flux, and the aquatic Buick of Unconditional Love. Like the Buick of Unconditional Love and the Truck in Flux, this ArtCar features a living garden on the roof.
Daisy has already traveled extensively from Canada to Arizona and I plan to take it on ArtCar tours to schools & hospitals around North America.” via
Daisy Singer by Philo Northrup 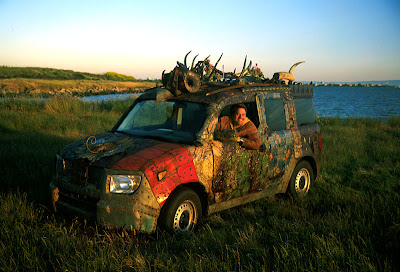 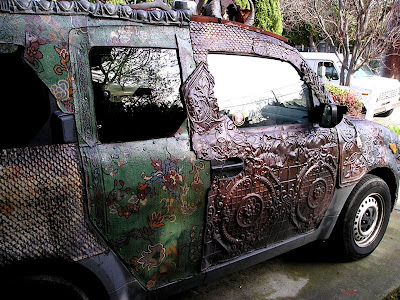 Costas Schuler aka "The Pen Guy" who entered the world of art cars by creating the world famous Mercedes Pens Art Car covered in over 10,000 pens. From then he went on to create Art Car Central, home of the world's largest collection of art cars, art bikes, mutant vehicles and every other decorated vehicle known to man. Enjoy and if you see and art car please submit your today:)
Previous: How Berkeley Can You Get? Art Car Fest Video
Next: Alien Ship Invades Bondi Beach Australia