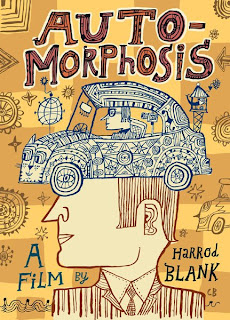 Harrod Blank’s art car movie Automorphosis is now out and will be shown in selected theaters around the country. This is the most amazing and inspiring look into the minds and hearts of those of us out there who build and drive these works of mobile art called art cars. The movie is a humorous and touching journey as we discover what drives these cast of unconventional characters in their creative process. Some of the cars featured in this movie will be: The Camera Van, The Telephone Car , Salvation Mountain. In fact the whole reason art car central is here today is because of Harrod’s book wild wheels that inspired me to create the Mercedes Pens art car and then on to create this blog. So I am very excited about this movie and want the world to know about it.

The other big news is that David Silberberg’s film about Harrod life and career, “Oh My God, It’s Harrod Blank!” is going to have it’s World Premiere at the Slamdance Film Festival in Park City Utah January 16th.

Here are the play dates for the two films:

Harrod Blank will in person at all of his screenings and at David’s screening on the 16th so get there support the movie.

Harrod is also currently entering his film into as many film festivals as he can and it is looking good for Ashland Film Festival, and Santa Cruz. He will be doing a special screening in Lubbock Texas in April which will know about later and hopefully Dallas, Austin, Houston, and Mcallen all in April, May.

And hopefully the DVD will also be released around March.

Costas Schuler aka "The Pen Guy" who entered the world of art cars by creating the world famous Mercedes Pens Art Car covered in over 10,000 pens. From then he went on to create Art Car Central, home of the world's largest collection of art cars, art bikes, mutant vehicles and every other decorated vehicle known to man. Enjoy and if you see and art car please submit your today:)
Previous: Dotmobile Art Car by Little Shiva –
Next: Funky Mercedes Hearse Art Car – What a way to go.

15 Most Popular Penny Art Cars Worth Every Penny