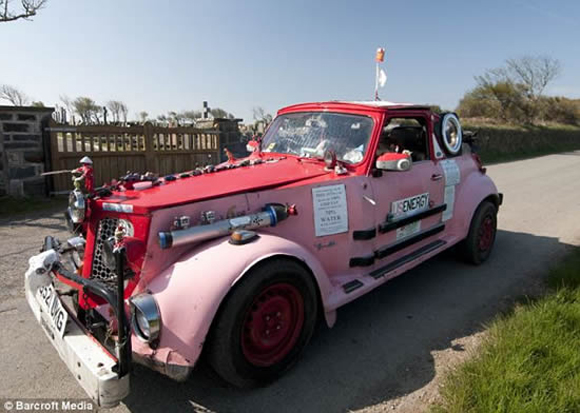 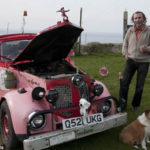 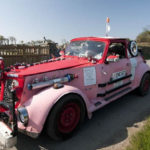 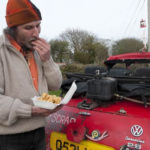 The Womble Truck is a bio diesel Frankenstein art car that lives on french fry oil and may very well be one of Britain‘s most environmentally friendly cars. It was pieced together in a lab from 21 different cars but is capable of reaching speeds up to 80mph…eventually.

The vehicle was cobbled together from an array of car parts including some from a Sixties Morris 1000, Seventies Mini, a Ford, a Reliant Robin, an MG Midget, a Vauxhall Viva and a Volvo 740. This Frankenstein art car is definitely the poster child for budget mod projects.

It was created by sculptor and environmentalist Buzz Knapp-Fisher, who spent the last six years modifying the automobile into an almost carbon-free mode of transport. He spent about $400 on the car and made some modest and cheap adjustments over the years. Artistically speaking it works because even thought he used all kinds of car parts he managed to stay on one side of the color spectrum.

The Womble Truck started out as a gas car but he eventually was converted to run on bio diesel and now runs entirely on french fry oil. It can run on regular diesel and only does so if its too cold to start with bio diesel first. As you can imagine his gas bill is way low. Nice work Buzz and good luck on your next project with the electric car.
via

Costas Schuler aka "The Pen Guy" who entered the world of art cars by creating the world famous Mercedes Pens Art Car covered in over 10,000 pens. From then he went on to create Art Car Central, home of the world's largest collection of art cars, art bikes, mutant vehicles and every other decorated vehicle known to man. Enjoy and if you see and art car please submit your today:)
Previous: 1958 Rolls Royce Silver Cloud 4×4 Hippie Glam Art Car Magnolia Pearl by Rrobin Brown – You Really Must See this Car!!!
Next: Mike Mullen’s Psychedelic 1961 Citroën Mystery Art Car