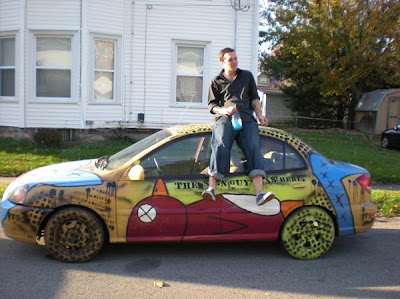 Its not so much about this graffiti art car and the guy sitting pretty on the roof with the Gatorade bottle, as it is about guy who sent this picture. Dan Goodman stand up comic is the creator of a web site called Ghetto Myspace with real pics from the web’s worst hood that is both both fascinating and terrifying at the same time. I warn you, I got sucked into it 20 pages deep and viewer discretion is advised due to the mature nature of the photos.

You have been warned…

Costas Schuler aka "The Pen Guy" who entered the world of art cars by creating the world famous Mercedes Pens Art Car covered in over 10,000 pens. From then he went on to create Art Car Central, home of the world's largest collection of art cars, art bikes, mutant vehicles and every other decorated vehicle known to man. Enjoy and if you see and art car please submit your today:)
Previous: 4 Startfish + 4 Barbies = TWCRV aka The Worlds Cutest RV
Next: Retro Vinyl SSR Art Car – Artefacts