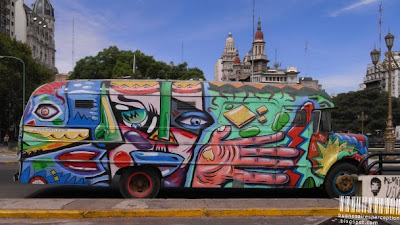 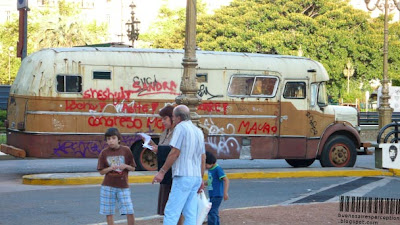 I found this before and after shot of a camper van on the Plaza delos Dos Congresos parked near the Argentine National Congress as a form of protest by the owner about something or rather. Some months later the bus gets a fantastic makeover by a young French artist named Louis D’Anjou a.k.a ‘GROLOU, who thought the bus needed a facelift. I think the new look is a vast improvement,nice work.

Costas Schuler aka "The Pen Guy" who entered the world of art cars by creating the world famous Mercedes Pens Art Car covered in over 10,000 pens. From then he went on to create Art Car Central, home of the world's largest collection of art cars, art bikes, mutant vehicles and every other decorated vehicle known to man. Enjoy and if you see and art car please submit your today:)
Previous: Techno Jeep Music Art Car by Julian Smith
Next: Christmas Spirit Manifested by Spray Painting a Limo?