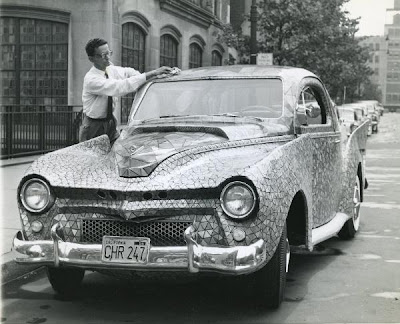 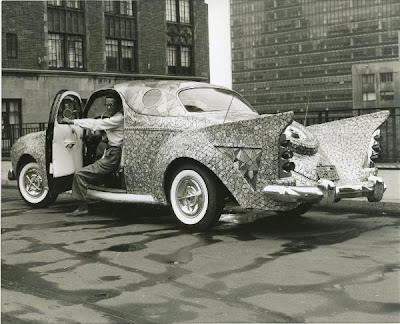 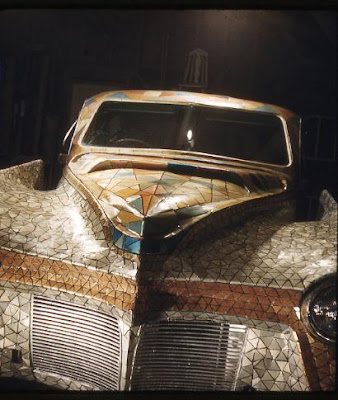 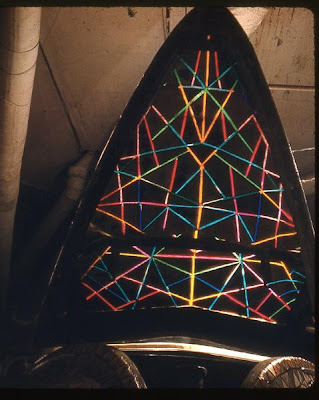 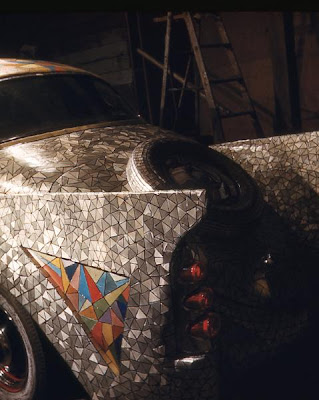 I got an email about an amazing 1938 Zephyr Art Car created by Greek artist Nikos Bel-Jon in 1956. The car was eventually sold and now the son of Nikos has put out call to find his dads MISSING Athena Art Car. More info about Nikos Bel-Jon can be found on his web site

My father, Nikos Bel-Jon was born in Greece. In the late 1940’s he began to develop a technique for creating murals on metal in San Francisco. He created many murals around the Bay area and for a number of companies in the metal industry in the 1950’s. One of them was Kaiser Steel and Aluminum. His close relationship with them and their involvement in the Kaiser-Fraser car may have influenced him to create his mosaic car. During a radio interview he talked about someday wanting to do a car for Kaiser-Fraser “that would shine in the reflected colors of neon and traffic lights”.

It took my father 2500 hours and $3,000 to create “Athena” (named after my sister). He started on it in 1956 and completed it a year and a half later. He was assisted in the body work by his father-in-law Frederick Brokoetter and his brother Achilleas. The mechanical work was done by an outside mechanic.

“Athena” was originally a 1938 Zephyr (not running) purchased for $35. The hood, part of the trunk and top were cut off and the entire body was rebuilt with clay and fiberglass. My father’s signature technique of individually cut and directionally burnished tiles of aluminum applied in mosaic fashion and covered with epoxy resin plastic were used on the car. A rainbow of colors of anodized aluminum abstract sections formed the semi-translucent top and hood. By the time he finished it had, among other things, a 1957 Mercury dash, Chevrolet bumpers, DeSoto lights, Ford V8 motor, Studebaker windows, Buick interior accessories, Olds hub caps, Naugahyde seats and black wool carpeting. The rear bench seat was replaced with two seats with a table in between.

The car went through several reincarnations (note the front grills in the photos on the site) as some of his designs and changes detrimentally influenced the performance of the engine forcing it to continually overheat. Despite the changes, the car continued to have overheating problems to the point that when we went cross country to NY my mother took my sister and I ahead by bus to Vegas while my father crossed the desert alone. He could only drive at night and had to stop constantly, which took days.

We spent weeks visiting sights across the country like the Grand Canyon and the Petrified Forest. It was hard to tell what people gawked at more – “Athena” or the famous spot they came to see. The car was mentioned in “Popular Mechanics”, “Popular Science”, sports car magazines and numerous papers as we passed through.

“Athena” was awarded “Most Unusual Car” in 1959 at the Albuquerque, NM Custom Automobile Show and was featured in the program for the 1960 Greek Independence Day Parade in New York.

The NYPD pressured my parents to get the car off the streets as it attracted too much attention. Garages in Manhattan were not an option and they eventually sold the car through Ray Garson at Flag Motors at 82-05 51st Avenue in Elmhurst, NY in the spring of 1960 – which is where my trail ends. I just heard from someone that he might have seen a glimpse “Athena” in Oklahoma City in recent years. Fingers are crossed.

Off topic again –if you visit our site to see the car please take a minute take a look at the rest of his life and art – he was pretty incredible!

Costas Schuler aka "The Pen Guy" who entered the world of art cars by creating the world famous Mercedes Pens Art Car covered in over 10,000 pens. From then he went on to create Art Car Central, home of the world's largest collection of art cars, art bikes, mutant vehicles and every other decorated vehicle known to man. Enjoy and if you see and art car please submit your today:)
Previous: Flivver Art Car By Joy Johnston – Joy Hats For Sale
Next: Snake Art Cars – Kevins GI-Joe Cobra Rattler Art Car