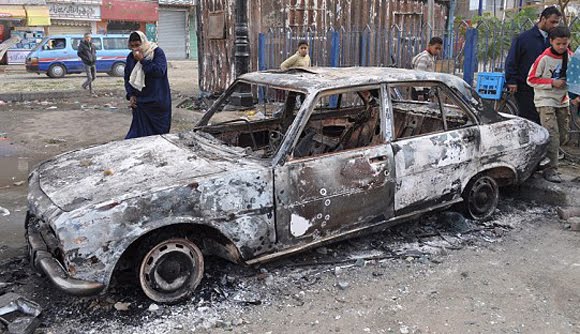 The Egyptian protesters in their quest for freedom have developed a rather unique form of art car creation. All that is needed, is an angry mob, gasoline, a lighter and a parked car. The angry mob picks a car at random, dosed it in gasoline and then sets it on fire. The process takes about an hour and after everything flammable is consumed a very unique and beautiful texture emerges on the car. The car is no longer operable but that is no concern to the protesters. What matters is that the car now has a rustic, old-world feel that hearkens back to a time when angry mobs were all the rage.

Costas Schuler aka "The Pen Guy" who entered the world of art cars by creating the world famous Mercedes Pens Art Car covered in over 10,000 pens. From then he went on to create Art Car Central, home of the world's largest collection of art cars, art bikes, mutant vehicles and every other decorated vehicle known to man. Enjoy and if you see and art car please submit your today:)
Previous: Steelers Fan Paints his Mercedes in time for Super Bowl
Next: Volvo Tank and Helicopter Banger Rally Art Car