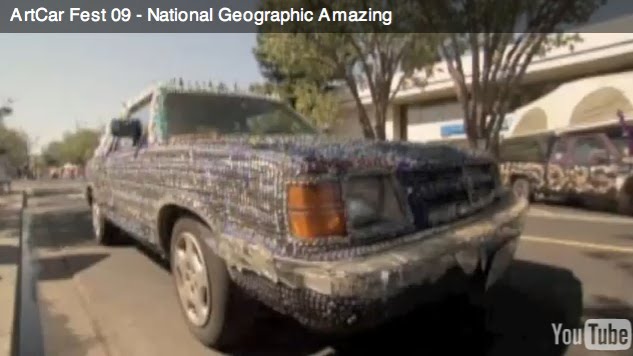 ArtCar Fest 09 was recently featured on National Geographic Television on a show called National Geographic Amazing. This episode had a bunch of shots of cars such as, Space Junk, Carthedral, and Ah My Gawd by Harrod Blank.  There were also a three art cars that were interviewed: Daisy Singer by Philo Northrup, The Mercedes Pens by Costas Schuler, and Vain Van by Emily Duffy.

Costas Schuler aka "The Pen Guy" who entered the world of art cars by creating the world famous Mercedes Pens Art Car covered in over 10,000 pens. From then he went on to create Art Car Central, home of the world's largest collection of art cars, art bikes, mutant vehicles and every other decorated vehicle known to man. Enjoy and if you see and art car please submit your today:)
Previous: Sleep Tight in the Mercedes Bed
Next: The Duckmobile Art Car by Jen Mulder